In the Commonwealth, pursuant to Title XIV, Chapter 90 of the Massachusetts General Laws (MGL), which is part of the Public Ways and Works regulations, everyone who operates a motorcycle, rides on a motorcycle as a passenger, or is riding in a sidecar mounted on the side of a motorcycle must wear protective head gear. 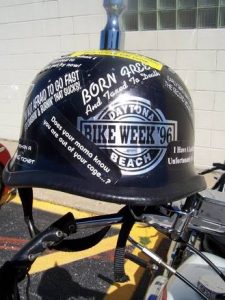 There is no description of what the protective head gear must be other than it must conform with the requirements as set forth in the regulations of the Registry of Motor Vehicles (RMV).  This currently includes a helmet approved for use on a motorcycle and some form of eye protection. This can include a windshield on the bike unless you have an instructional (learner’s) permit.  If you have an instructional permit, then eye protection is required.  This can include goggles or a visor on the helmet.  However, it should be noted that if you have a flip-up visor on your helmet, it must be down when you are riding, or the police can, and often will, pull you over and issue you a fine for not complying with safety laws.

If you are wondering why helmet laws are relevant on a blog about victims being injured in a motorcycle crash, it goes beyond the obvious fact that a person in a motorcycle crash is much more likely to be injured or killed in they do not have adequate protective head gear.  In fact, there can be serious legal consequences to a Boston motorcycle accident lawsuit if the rider was not wearing a helmet at the time of the crash.

The first thing to understand is that in any negligence case, as we have discussed in other blog posts, the plaintiff must establish the following four elements:

The duty is a duty to act as a reasonable and prudent person so as to prevent foreseeable harm to foreseeable persons and property. This is basically a duty to drive like a reasonable person at all times, such as exercising ordinary care and keeping your eyes on the road at all times.  This duty is imposed by statute in that anyone who operates a vehicle on the streets or roads of the Commonwealth has accepted this duty of care.  Even if you are not licensed in Massachusetts and are here from out of state, you will still be held to this duty and standard of care.  However, every state in the Union has this duty of care rule, so it should not be a surprise.

The next element is causation.  This includes both actual and proximate causation, but what we are mainly concerned about is whether the breach of a duty of care owed to plaintiff caused the damages (harm) alleged in this case.

Whenever your Boston motorcycle accident attorney files a claim following a serious or fatal crash, defendant’s insurance company, even if they are accepting liability, will often challenge the amount of damages.  One way they may do this is to argue that the plaintiff also contributed to the damages caused.  In other words, they will argue that the plaintiff is at least partially responsible for the injuries he or she suffered.  In some cases, this will be in the form of an argument that plaintiff was also violating some type traffic law at the time of the accident. In cases where the motorcycle operator or passenger suffered a head injury, and was not wearing a helmet, the insurance company will likely argue that the lack of a helmet, as required by law, led to the injuries in question.

At common law, there was what is known as a pure contributory negligence system.  This means that if plaintiff was in any way liable, even one percent liable, for the injuries he or she sustained, then that would be a bar from winning in court.  In other words, if the plaintiff was hit by another car and died of a head injury, but he or she was not wearing a helmet, plaintiff could not recovery any money in the lawsuit if it could be established that having a helmet would have helped.

This is a rather harsh result, so many states, including the Commonwealth, did away with the pure contributory negligence system, and we now have what is known as a comparative negligence system.

For example, if plaintiff was riding his motorcycle, and he was cut off by another car, this could result in a serious or even fatal accident.  Assuming plaintiff was not wearing a helmet and suffered a head trauma that resulted in a traumatic brain injury, there could be significant damages in the personal injury lawsuit. However, defendant would likely argue that the injuries were only caused by plaintiff not wearing a helmet.

At this point, the burden would likely shift to defendant to establish negligence, and plaintiff could counter by showing that even if plaintiff was contributorily negligent, he was not greater than 50 percent negligent and might propose a much lower figure like five percent.  If the case when to trial, a jury might find that plaintiff was 20 percent negligent, for example.  While at common law, this would mean he could not recover, under our system of comparative negligence, plaintiff’s recovery would be reduced by 20 percent.  This means that if plaintiff was awarded $400,000, the award would be reduced by an $80,000 offset, so plaintiff would be awarded $320,000.