Tragedy has been reported in Alabama, where a charter bus crash killed one and injured several others after the bus plunged into a ravine. The Associated Press reports the bus was returning a group of high school band members back to Texas after a class trip to Disney World. The bus ran off the highway and into the deep pit. 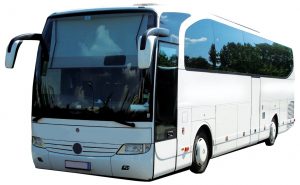 The driver died, while several of the young passengers suffered various personal injuries. The local sheriff reported 45 people were aboard the bus. Thirty-five people (mostly teens) were treated at local hospitals, with injuries ranging from minor to severe.

It’s unclear at this juncture what caused the bus to careen off the road. However, it’s no secret that charter buses have a long history of safety problems. Although bus accidents overall comprise a relatively small number of overall motor vehicle collisions, they are not (by some measures) safer than cars. One study published by the Journal of Safety Research revealed that while only about 0.6 percent of the total number of auto accidents in the U.S. involve a bus, the number of bus accidents per 1 million passenger miles is 3.04, compared to the car accident rate of 3.21.

Drivers who are novice, inexperienced or older than 65 have the highest rates of bus crashes – especially when they work for companies that have a history of safety lapses (i.e., failure to properly train and supervise drivers, pushing drivers to work beyond federal hours of service limits and not properly maintaining their buses).

It was just a few years ago in Massachusetts that a charter bus crash in Massachusetts injured dozens on a return trip to Pennsylvania following a Harvard University tour. Passengers were trapped for more than an hour and, as USA Today reported, there were critical and severe injuries that required hospitalization. The crash caused damage to both the bridge and Soldier’s Field Road – somewhere the bus never should have been because of a major cross street with a 10-foot height limit for the overpass and a restriction on over-sized vehicles. The driver reportedly failed to heed warning signs.

The National Transportation Safety Board reports that every year in the U.S., 700 million passengers are transported by buses. That’s almost the entire European populace. Although many people make it safely to their destination, there thousands of injuries and well over 1,000 deaths a year in bus accidents. Many of those involve charter buses (also sometimes referred to as for hire motor carriers or motor coaches). The U.S. Department of Transportation reports there were 69,000 bus accidents in 2014 alone.

The Most Recent Charter Bus Crash

News reports indicate the most recent crash occurred around 5:30 a.m., after the driver had been operating the vehicle through the night. Although investigators have yet to determine a cause, fatigue is suspected.

The band members had performed at a music festival and were seen in a social media update several hours earlier posing in front of a Disney World sign.

The school bus charter company promised to aid local authorities in their investigation of the crash. School district officials had only limited details. Our Boston bus accident attorneys recognize that both have the potential to be named as defendants in personal injury lawsuits by the students who have endured physical pain and suffering, mental anguish and have likely racked up sizable medical bills.

With few exceptions, buses and shuttles that operate for-hire are required to carry minimum insurance level. General guidelines are:

That might sound like a lot, but keep in mind: that usually has to cover all injured passengers. It may not go far if there are dozens of injuries. Talking to an injury attorney as soon as possible after a Massachusetts bus accident may be the best way to secure your claim to damages.

Some of the other FMCSA rules and federal law outlined for interstate motor coach companies:

Companies who hire driver who aren’t properly qualified or trained may be liable if a crash occurs and it’s the driver’s fault. They may also be liable for pushing/ allowing/ failing to supervise drivers who violate these federal hours of service rules.

It should be noted there is a distinction between motor coach buses (for hire) and those that operate by a government entity (i.e., a school bus or a city bus or an operator contracted by a government agency). It will affect liability issues.

Claims against the Commonwealth that are caused by the “negligent or wrongful acts or omissions of any public employee while acting within the scope of his office or employment” have to be filed in accordance with the Massachusetts Tort Claims Act, MGL Chapter 258. These may have more stringent filing requirements and deadlines than personal injury claims against private individuals or businesses.

In both cases, consulting with an experienced auto accident attorney as soon as possible is in your best interest.