In what authorities are describing as miraculous, an 18-month-old child has survived being trapped upside down in a car seat after the car her mother was driving plunged into an icy river. According to a recent news article from CNN, first responders arrived at the scene of a Utah car crash they believe happened 13 hours before they got there. 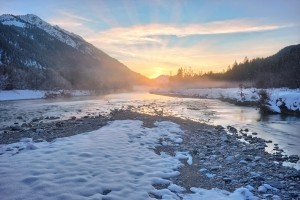 According to witnesses, a man was going fishing in that particular area of the river when he waded out and saw an upside down car in the water. He said the car was not visible from the roadway. He immediately called 911. When police and firefighters arrived, they rushed into the water and got to work. One police officer says he doesn’t even remember any details about the rescue other than running to the car.

Due to the extreme low temperature of the river, seven first responders were rushed to the hospital to be treated for hypothermia. When they pulled the car onto its side, they immediately noticed the driver, a 25-year-old-woman, was deceased. What happened next was what made this story so astonishing. Rescue workers noticed a baby still strapped into her car seat. She had been hanging upside down from that seat as the car sat partially submerged in icy water for 14 straight hours.

She was unconscious and unresponsive but still alive. Police estimated the approximate time of the crash from speaking with a nearby resident who heard a loud crash the prior evening. He went outside to see what happened, but since the accident was not visible from the road, he figured there was no accident, and went back inside.

Police believe victim ran into a bridge embankment, drove up a cement barrier on the bridge and plunged into the icy river below. Reporters asked doctors how the baby survived this horrific ordeal when her mother died in the same accident. They believe it was the child safety car seat that played the biggest role in her survival. She was properly restrained in the seat, which kept her suspended above the freezing water below. While the air was cold as well, it was nowhere near as cold as the water.

Four rescuers also reported hearing a voice calling for help that did not sound like a child’s voice. They have no explanation for this voice, but all agree they heard it.

There were no skid marks leading up to the spot authorities believe victim’s car ran off the road, and they have no idea as to the cause of the accident. They do not believe alcohol or drugs were involved in this fatal car accident. Accident reconstruction specialists had victim’s car removed from the river and taken for inspection to see if there were any mechanical defects, which may have contributed to the car accident.

As our Boston car accident attorneys can explain, if a motor vehicle crash was the result of a manufacturing defect or service error, you may have a case against the car maker, dealer, or garage who performed service on the vehicle.

In the Commonwealth of Massachusetts, your claim may also fall within the Consumer Protection Act, which may allow for triple recovery in certain cases.