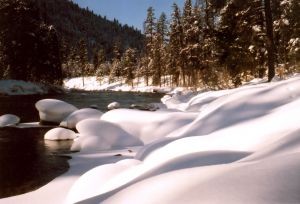 Authorities say Khloe Kardashian was driving a GMC Yukon, when it slid of the road and crashed into a ditch. Kim Kardashian, her sister, and daughter were all passengers in the vehicle. Initially, a highway patrol spokesperson would not name occupants and only reported celebrities were involved in a car accident.

This single vehicle accident occurred early Sunday morning near Bozeman, Montana. Police are not reporting any injuries, and it is believed the vehicle was able to be driven away from the scene of the accident after being pulled back on the road by an emergency service vehicle.

Kardashian issued a statement via Twitter thanking God for watching over her family and keeping them safe.

In Bruce Jenner’s accident, involving four vehicles, one driver was killed as a result of the crash. Authorities believe a Toyota Prius stopped without warning when it was hit from behind by a Lexus. Jenner was driving a Cadillac Escalade behind the Lexus. He turned, likely swerving to avoid a crash, but still hit the car at an angle. There were several serious injuries in this accident, including Lexus driver who was fatally injured and pronounced dead at the scene. Other injuries included two adults and five children. The other injured vehicle occupants were rushed to local hospitals by first responders.

While police did not report actually suspecting alcohol as a cause of the accident, police gave Jenner a field sobriety test, which he reportedly passed.

Boston car accident lawyers often deal with accidents involving multiple vehicles. These “chain reaction” car crashes, as they are sometimes called, may require additional investigation and litigation than accidents only involving one or two vehicles. One reason for this is it may become a significant issue as to which drivers involved in the crash were operating in a negligent manner.

There is no question a driver must leave enough space to prevent running into a vehicle in front of them. Police call driving too closely “failure to leave assured clear distance,” while most other people commonly call this behavior tailgating. This means when one vehicle suddenly stops, it may be negligent for the vehicle behind them to run into them because there were tailgating. Most times this is considered negligent, which is actionable in a civil lawsuit. However, the issue is not as clear when the second vehicle is hit by a third tailgating vehicle and is forcefully pushed into the car in front of them. There is not always a clear answer to this question, and you should speak with an experienced car accident lawyer to learn what your rights are if this happened to you or a loved one.