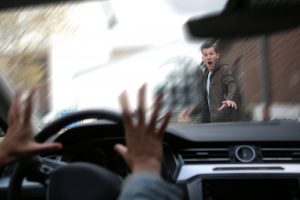 injury or death. An unprotected pedestrian walking across the street or on the side of a road is simply no match for a speeding vehicle made of steel and weighs more than a ton.

However, a new study released in May 2020 says not all vehicles are alike when it comes to pedestrian accidents.

Despite recent design changes, sport utility vehicles, also known as SUVs, are more likely to kill pedestrians than cars, according to the Insurance Institute for Highway Safety.

“The proportion of SUVs in the U.S. fleet has grown dramatically, so it’s discouraging that they still seem to be more deadly to pedestrians than cars are,” IIHS statistician Sam Monfort, lead author of the study, said in a June 16, 2020, statement.

As Monfort points out, SUVs seem to be taking over the nation’s roadways. SUVs and pickup trucks took hold of 70% of the market, with nearly 6 million sales through June 2019 compared to 2.5 million sales for cars, according to a September 12, 2019, article by The New York Times.

Almost 20% of All Traffic Deaths Are Pedestrians

The IIHS study analyzed more than six dozen crashes involving pedestrians in urban areas in Michigan. Here are some of the findings:

IIHS also notes that the number of pedestrians killed in motor vehicle crashes increased by 53% from 2009 to 2018. Over that same period, SUVs increased in number, accounting for 29%, or nearly one-third, of the U.S. passenger vehicle fleet.

“Pedestrians now account for nearly a fifth of all traffic fatalities—a proportion not seen since the early 1980s,” IIHS said.

Why Are SUVs Deadlier to Pedestrians?

In the data studied by IISH, SUVs were more likely than cars to throw pedestrians forward and almost twice as likely to cause serious hip and thigh injuries. The cause of those injuries? Impact with the SUV’s bumper, grille or headlights.

IISH explained that “the high point of the front profile, or ‘leading edge,’ of most new SUVs” is higher than that of most passenger cars.

“In a crash with a traditional, block-front SUV, the grille strikes the pedestrian’s pelvis or chest split seconds after the bumper hits the lower extremities, transferring more energy to the pedestrian’s body,” the organization said.

Recently, SUV makers have started basing their vehicle designs on cars to minimize the risk that SUVs pose to car occupants. For example, by lowering bumpers and other parts that absorb force, SUVs align better with cars and no longer pose a greater risk to car occupants than cars of similar weight.

“In pedestrian crashes, the location of the force-absorbing structures is less important than the overall shape of the front end,” IISH said.

According to the organization, similar efforts have not been made to tackle the danger that SUVs pose to pedestrians. IIHS said it plans to use the Michigan crash data to determine what kind of SUV profile poses the least amount of danger to struck pedestrians.

“It’s possible that a more sloping profile could do less damage,” the organization said.

Some Safety Tips for Pedestrians and Motorists

While pedestrians will always be vulnerable to SUVs and other motor vehicles, there are some steps that they can take to protect themselves:

As for drivers, they can take the following steps to keep pedestrians safe:

IIHS describes itself as an independent, nonprofit scientific and educational organization with a mission of reducing deaths, injuries, and property damage from motor vehicle crashes.

To learn more about how the pedestrian attorneys at Jeffrey Glassman Injury Lawyers, LLC can help you with your SUV or other car accident claim, contact our law firm today at (617) 777-7777 or through our online form.