Fortunately, there were no life-threatening injuries as result of what could have been a much more serious train accident. Police say the driver of the truck and the train engineer were both able walk away from the accident. There was passenger on the train that complained of some type of injury, and he was taken to a local hospital. 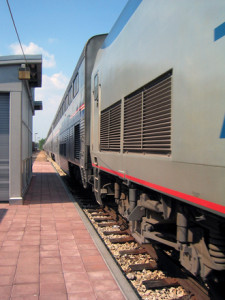 The oversized-load truck was carrying an electrical transformer of some sort at the time of the accident. This electrical transformer weighed around 150,000 pounds, so it is easy to see how much worse this accident could have been, had the train collided with the bulk of the transformer instead of just clipping it. The road, however, remained closed for hours, because it was not easy to find another vehicle capable of moving the giant transformer. It is important to note that nobody was determined to be negligent in connection with this car accident.

There are a variety reasons a train accident can occur. These days, a central command center for the railroad keeps track of all trains and their locations and speeds. On freight trains and passenger trains traveling long distances, the engineer must push a switch known as “dead man” switch at least once a minute to notify the command center that he or she is awake and paying close attention. That being said, we do have train accidents all the time.

Another reason for train accidents is a defective railroad crossing system. It is essential they warn oncoming traffic that at train is approaching, and drivers must have sufficient time to make sure they are not between the railroad crossing gates when the train arrives.

We have seen cases of train crashes in greater Boston area where cars were hit because of defective railroad crossing signals. If the railroad crossing system was defectively designed, defectively labeled, or negligently operated by the railroad company, any victims and their families might have a valid claim in a civil personal injury lawsuit following a serious accident. It should be noted that these cases can become fairly complex, because we are dealing with several potential plaintiffs and a defendant who is likely to try to hide behind federal legislation to protect them for liability. There is also an issue when another company may have been contracted out to run and staff the train, and this can further complicate matters. The best thing you can do is to make sure your attorney has experience with these types of cases.

With the respect to the federal statutes, some cases involving commercial passenger carriers fall under specific federal regulations, and these regulations can complicate the process. It is important to note, in this case there has been no finding of liability on behalf on anyone as of this time.