Those who have watched the Netflix Original Series Orange is the New Black (OITNB) are familiar with the character Flaca, who is portrayed by Jackie Cruz.  In a recent interview for the Huffington Post, Cruz discuss how she is thankful for the serious car accident she experienced when she was still a teen. 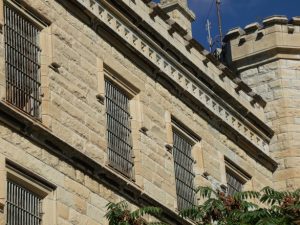 Cruz says that she was friends with a girl who was a bad influence and was in the girl’s car when she decided to engage in an illegal street race with another car.  She was not wearing her seat belt as she sat in the passenger seat of her friend’s car on the day of this race.

As the cars were racing down the street at high rates of speed, the car Cruz was in hit the curb. The driver lost control of the vehicle. The vehicle rolled over at least three times in a violent manner, and Cruz was ejected from the vehicle through the front windshield. She was very badly injured in this near fatal car accident.

When she awoke in the hospital, she had an intubation tube in her throat and was told two weeks had passed since the car accident.  She was also told that she was in a coma for the first 72 hours following the accident. She also learned the full extent of her injuries. She had suffered a bruise on her kidney, a collapsed lung, she had broken her spine in two places, and had to have emergency brain surgery while she was in a coma.   She was covered in cuts and had scarring all over her body and face.  She also learned that her mother, who was pregnant at the time, had not been able to eat while her daughter was in the condition and suffered a miscarriage.

While it may seem amazing that she is thankful for this accident, she said that the emotional trauma she went though has helped her with her acting career, and when she has sad roles and scenes, she is able to channel how she was feeling in the aftermath of the car accident into her performances.

In addition to pain and suffering, you can also ask for damages (money) for medical bills, future medical care and rehabilitation, lost wages, and other types of special damages.  All of these types of damages are under what is known as compensatory damages and are the typical measure of damages in most car accident lawsuits.   In some cases, you can ask for what is known as punitive damages, but these cases require the defendant to have engaged in conduct beyond mere negligence.

Why Jackie Cruz Is ‘Thankful’ For Life-Changing Car Accident, September 7, 2016, By Carolina Moreno, The Huffington Post