While we do not generally think of Boston as an area where we have to worry about large animals being in the road, the areas just outside of Boston do see some of these accidents from time to time.  However, it is not to say this can never happen in Boston, as many may remember when a Moose made its way to Cleveland Circle in Brighton and shut down three of the five Green Line Ts. 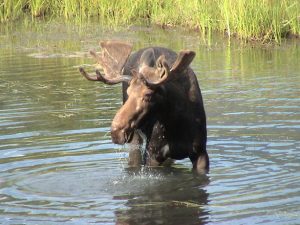 According to a recent news article from The Boston Globe, a moose was hit by a car at the start of what turned into a three car accident. The moose did not survive the accident.  The driver of one of the vehicles suffered what is being described as minor injuries. The accident occurred in the Worcester area on Route 9 about a half hour outside of Boston.

Witnesses have said the moose had apparently jumped over a guardrail on the side of Route 9 and made its way onto the road surface and was hit by a Subaru.  Following being hit by the Subaru, two other vehicles also collided with the moose, and one of these vehicles was a semi tractor trailer.

When first responders arrived on the scene of this three-car accident, they treated the driver of the Subaru and then transported him to the University of Massachusetts Memorial Medical Center for further treatment.  He was released from the hospital later in the day.   The moose was removed from the road by the state highway department and buried.  This was actually a small moose weighing only 400 pounds, as these animals can weigh over 1500 pounds and often result in death of the driver when hit by a car, as happens from time to time in New Hampshire and other New England states including Massachusetts.   As a result of the crash, the front windshield of the vehicle was smashed, and the roof was partially crushed. It should be noted that nobody was cited for any moving violations as of this time.

While it is often nobody’s fault when an animal jumps out in front of a car, if other vehicles crash into that car, there might be fault involved. This is something about which you should speak with an experienced Boston car accident lawyer.  When a vehicle is driving down the road, the driver is expected to do what the police call keeping an assured cleared distance ahead.  In other words, you are not allowed to tailgate anyone.

This means that if the vehicle stops short ahead of you, you should have enough time to stop completely so as to avoid crashing into that stopped vehicle.  There are variety of measures taught to new drivers such as always making sure you can see the wheels of the vehicle ahead of you and keeping at least three seconds between you and that car.  In some parts of the country where tailgating accidents are frequent, the highway department will even go so far as to paint large dots on the road, so drivers can count the number of seconds.   As a general rule, if a driver hits someone from behind, they are presumed liable for the accident, though this presumption can be overcome in some situations.